We use Cookies
To enable you to make the best possible use of our website and to be able to improve it continuously, we use common technologies. By clicking on 'Accept all' or activating the corresponding option, you agree to this. You can also find more information in our privacy policy. Here you can also subsequently change the selection you have made.

For a smoke-free OR

The powerful, compact MEDAP FUMOVAC 700 smoke evacuation unit is designed for continuous operation in the operating room and offers an extremely quiet flow rate of 700 l/min. It fulfils all the requirements of modern HF, RF, ultrasound, and laser surgery. The four-stage high-performance filter is fitted with three inputs of different sizes, tailoring it to suction tubes with a diameter of 22 mm (7/8"), 9.5 mm (3/8"), and 6.4 mm (1/4"). The inputs are protected with magnetic flaps.

through four filter stages and a long filter lifetime

Conta­mination protection for the OR team

The dimensions and weight of this device are 50 percent smaller than those of the previous model, ensuring exceptionally easy and space-saving integration into the OR environment. The MEDAP FUMOVAC 700 can be integrated into all conventional HF towers, or it can be placed on the platforms of ceiling supply units. 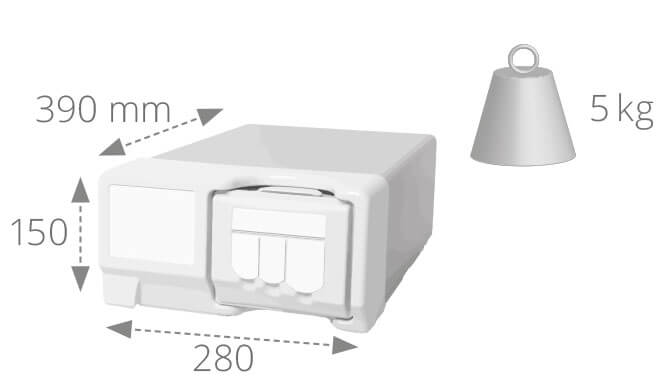 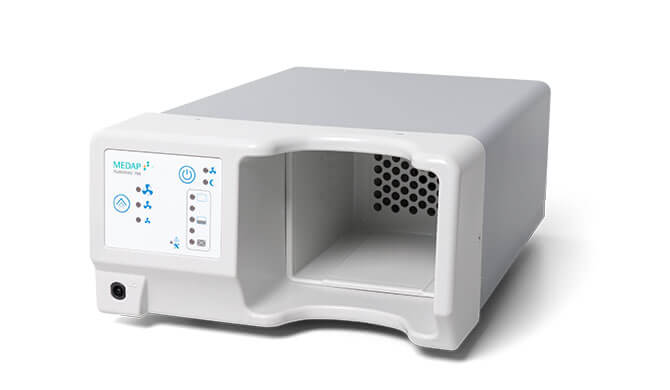 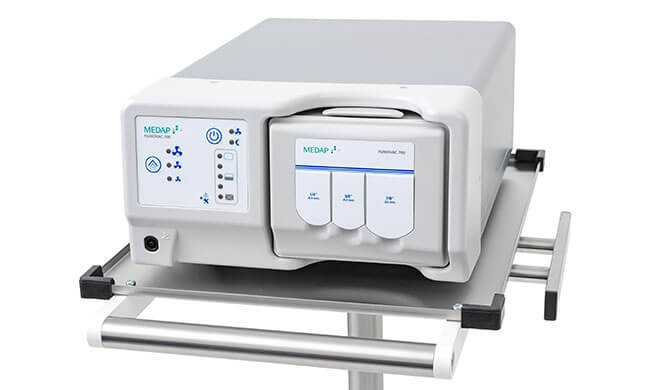 The filter is particularly efficient thanks to its four filter stages, three inputs with magnetic flaps, and a filter lifetime of up to 35 hours. 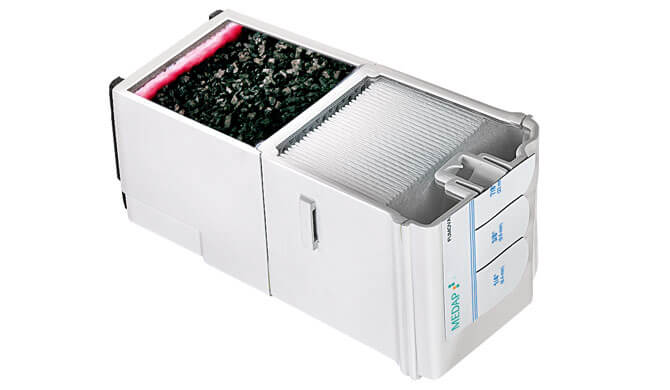 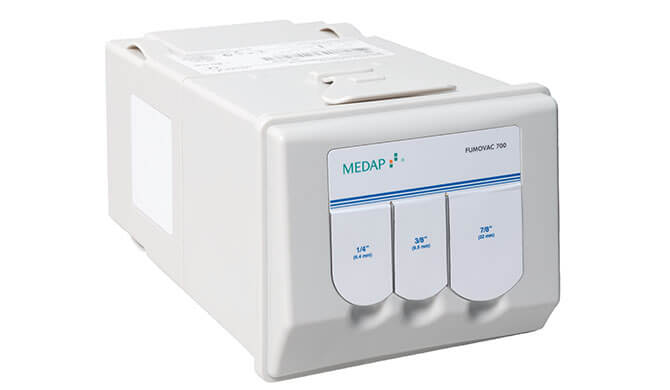 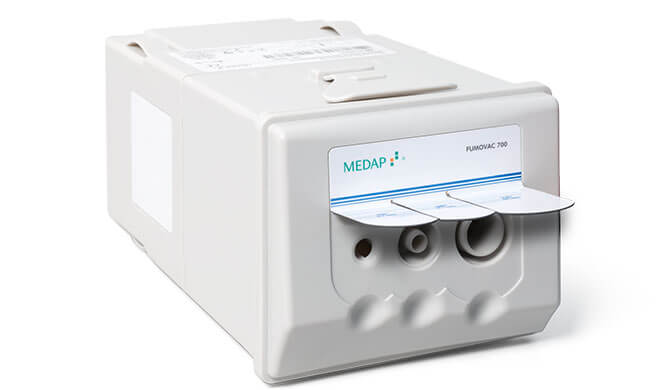 The automatic HF remote switch activator detects currents when the HF pencils are switched on and off and switches the smoke evacuation unit on and off at the same time. A lag time can be set if desired. 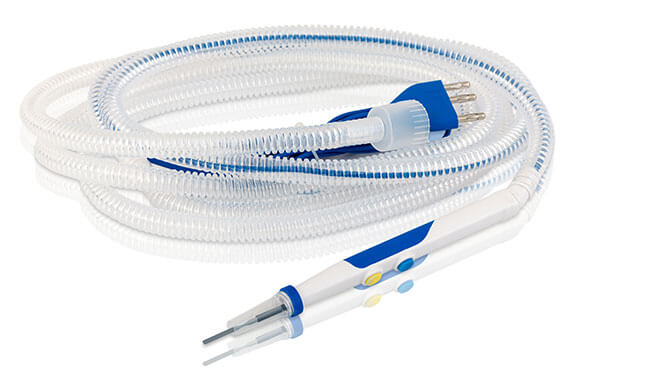 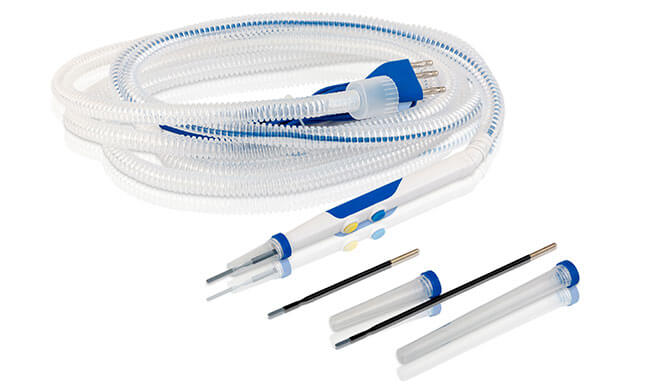 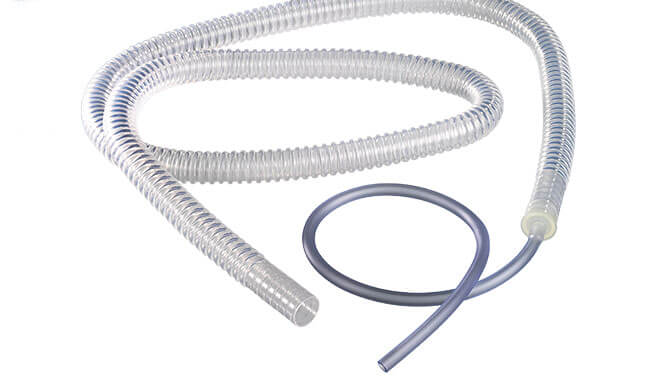 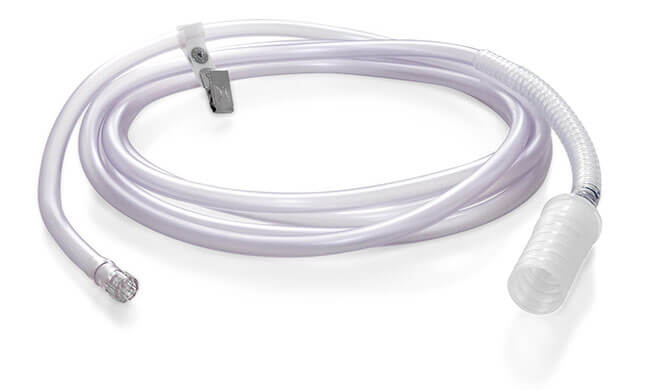 Normal ventilation in the operating room exchanges the air up to 24 times per hour. This is not sufficient to remove the locally generated aerosols and gases quickly enough to prevent them from posing a danger to the OR team.

No. These systems reach the following capacities:

Studies have found that a capacity of least 400–600 l/min is necessary for effective smoke evacuation.

Finally, surgical smoke can also damage the motor in electrical surgical aspirators and the complex mechanisms in tapping units if no special smoke evacuation filter is installed.

How high is the risk of contracting infections through biological substances arising during an operation?

It will always be very difficult to prove that certain biological substances were transmitted to a person during a particular operation and that such material caused a certain disease in that person possibly many years later.

Toxicological studies have identified erythrocytes and living cell material as well as biological contaminants, such as viruses, bacteria, mycobacteria, and fungi. Even viral DNA and HIV DNA have been found in tubes used for smoke evacuation and could be cultivated. In addition, inorganic and organic substances, such as carbon monoxide, benzene, formaldehyde, toluene, and carcinogenic toxins, have been detected.

The Technical Rules for Hazardous Substances in medical care facilities (TRGS 525) of the Federal Institute for Occupational Safety and Health in Germany (Bundesanstalt für Arbeitsschutz und Arbeitsmedizin) in the version of September 2014 explicitly specify the hazards of surgical smoke in chapter 8.1 and define the appropriate protective measures.

Are the particles arising during an operation really dangerous?

There are many studies in which over 41 different chemical substances have been found whose carcinogenic or teratogenic effect in animals and/or humans have either already been proven or suspected. Toxicological studies have identified erythrocytes and living cell material as well as biological contaminants such as viruses (e.g. papillomaviruses), proteins, prions (BSE agent), bacteria, mycobacteria, and fungi. Even viral DNA and HIV DNA have been found in tubes used for smoke evacuation and could be cultivated.

What dangers arise for the OR team when it inhales surgical smoke?

Since 90 percent of the particles present in surgical smoke are smaller than 0.3–0.5 μm, they can penetrate deep into the alveoli of the OR team and even be absorbed by the blood. This can result in pulmonary inflammations and is presumably even carcinogenic, the risk of infection via the mucous membranes and airways being higher with low-temperature vapours since temperature-resistant germs are not killed.

What are the consequences of poor air quality in the operating room?

During laser and HF surgery, cutting and coagulation produce smoke with unpleasant odours. This deteriorates the air quality in the operating room to such an extent that the OR team can experience headaches and nausea. Especially the organic components in the smoke are known to cause tiredness and a feeling of faintness as well as cardiac arrhythmia and breathing difficulties.

To ensure an optimum workflow, a remote switch activator is available that only activates the smoke evacuation unit when surgical smoke develops.

A special trolley allows for optimum positioning within the OR workflow.

Whether existing disposable or reusable electrosurgical pencils are to be used or a tube set with built-in disposable electrosurgical pencils, ATMOS offers a comprehensive range of tubes. For gynaecology and ENT medicine, ATMOS offers a special tube set for direct connection to speculum forceps. A special tube set for laparoscopy with a Luer connection for trocars and a flow limiter for minimal gas loss rounds out the ATMOS product range.

We would be pleased to make you an individual offer. Please fill in the adjacent boxes.

We would be happy to contact you to arrange a non-binding appointment. Please fill in the adjacent boxes.

We are here to help. Please fill in the adjacent boxes.